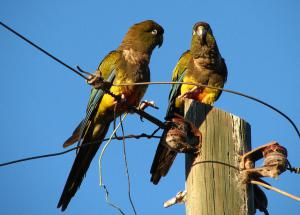 Body length 45 cm, tail 24 cm. The main coloring of olive-brown color with brown tint, on wings and head — With a greenish tint. There is a red spot on a yellow abdomen. Breast and throat of grayish-brown. The male differs from the female with a slightly larger head, a larger beak and a more intense red-orange belly-colored belly.

Lives in Chile, Argentina and in the south of Uruguay.

Inhabitable places inhabit — Grassy pamps, rocks and adjacent forests. They feed mainly on plant foods, seeds of cultivated and wild plants, trees, fruits, berries and herbs. In the winter months they migrate to warmer northern regions, where much more feed during this period.

Nest in hollows of trees or in niches of impregnable rocks. Often they themselves dig with powerful beaks hole for the nest. Sometimes the length of such a hole reaches 1 m. At the end of her — expansion for nesting chamber. In the masonry 2-4 white eggs. Running lasts 25 days. After 55-60 days, the chicks leave the nest.

They are distinguished by attachment to a person, trusting, they can learn to pronounce a few words. Nevertheless, this species did not gain great popularity. These parrots can often be seen in zoos, among lovers — much less of10. The reason for this — their rather sharp and loud voice. In Europe, these parrots were brought in the second half of the XIX century.