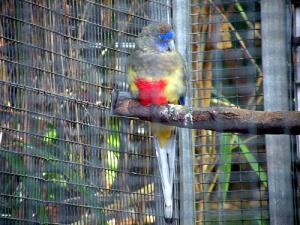 Body length 28-31cm. The main coloring of the brown-bolot. Forehead, front of the head, cheeks and ears of purple-violet. A small yellow strip above the ears. Breast belt, sides of the abdomen and subsidiary — Yellow. The middle of the abdomen and the femoral region are red. Wing bend, paramount flying, upper and lower covering wings — Lilac-violet. The shoulders are blue. The tail is blue below. The beak of a gray-bone color. The near -eyed ring is gray. The iris is gray-brown. Gray paws.

Lives in the southeast of Australia.

Dry savannah, edges of the forest along the coast of rivers inhabit.