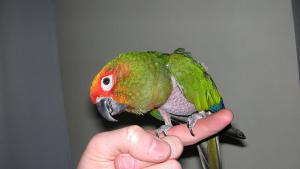 Body length 30 cm. Green plumage, the back of the head and forehead are red, the same color is an inequal area around the eyes. In the abdomen, the coloring is red-brown. Some parrots have interspersed yellow feathering among red plumage. The lower back and sacrum have red-brown borders. Among this species there are many variable colors.

They live in the east of Brazil (in Bai, Minas-Zirace, in the north of Paran and South of Goyas) and in Paraguay.

Inhabit subtropical and tropical forests, dry savannahs and plantations. In nature live in pairs or small flocks from 4 to 10 birds. They feed on seeds, chestnuts and fruits.

Nest in hollows of trees, under the roofs of houses. There are 2-4 eggs in the masonry. After about 24 days, chicks appear, and at 1.5 months of age they are leaning.