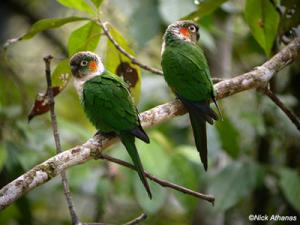 Body length 24 cm. It has a motley coloring of brownish, orange, yellow, white, pink and green flowers. The tail is pointed, red, but central steering with green border. The white ring around the neck is characteristic only for this species.

Live in the southeast of Ecuador.

Tropical forests inhabit. Outside the wedding period live in groups from 8 to 50 birds. Feed on fruits, seeds and berries.

The marriage period lasts, probably, from April to June.

For many years, he was represented by the only copy obtained in the south of Ecuador. Only in 1980, several birds of this species discovered in the tropical forest on the slopes of the eastern Cordillera in the southeast of Ecuador.

In Ecuador declared a guarded view. Forests in its habitats are largely changed or destroyed.