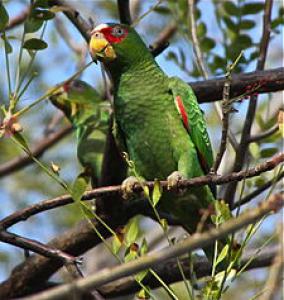 Belongs to relatively small parrots, body length does not exceed 26 cm; the weight — 380 g. The main coloring of the green plumage. Forehead and narrow area around the eyes are white. A strip around the eyes, forming a semblance of glasses of glasses — Red. Red strip is also on the wings — From the bend to paramount flyers. Flake feathers and stripes on the crown of blue. The lower part of the belly and the subsidiary have a yellowish tint. The beak is yellow. The iris yellow. The females in the plumage of the wing lack red color.

Live in Central America — From the northwestern part of Mexico to Costa Rica.

Due to small sizes, this type of parrot is very popular among bird lovers. Usually live up to 50 years.

Other types of genus «Amazons»: