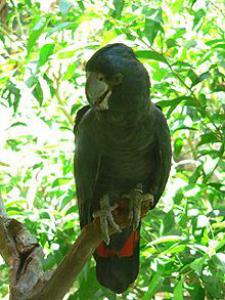 Body length 56—66cm; weight up to 900 g. The main coloring of the plumage is dark brown, the ends of the feathers are white. In the ear, there is a white or yellow spot. A longitudinal strip of yellow in color passes through the tail and sneak. Naked areas around the eyes are pink. The iris is dark brown. The paws are gray-brown. The beak is dark gray. The crest is small. In the female, the ear stain is brighter, the beak is light, the areas around the eyes are dark gray.

Lives in Southeast and East Australia.

They feed mainly with seeds of various trees, insect larvae.

The nest of the female and the male build together, in the hollow of the tree, lining it with wood sawdust. The female puts off 1—2 eggs. One incubates one, and the male feeds her. Only one chick usually survives, it remains in the care of parents for about 6 months.

Other types of genus «Mourning capacule»: