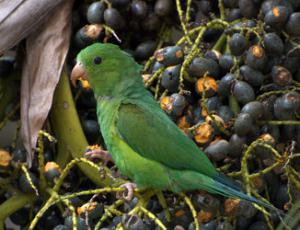 Body length is 20cm, the female is much less. Green color with a light blue tint on the head. The inner side of the wings is orange-bent, the bend of the wing is dark blue. The beak is light. The male and the female do not differ from each other in color.

Live from Ecuador to Peru.

For the first time, these parrots came to Europe in 1862, later they began to be imported to Russia. He is not as shouting as other representatives of the family and most capable of onomatopoeia. From chicky age, they can be taught to pronounce individual words. Even adult parrots without learning can memorize and speak words. They can imitate various sounds made by animals, as well as whistle and imitate the noise of the waterfall.