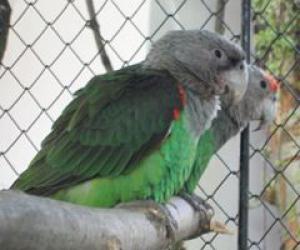 Body length 33-34 cm, tail 9 cm. The main coloring of the green plumage. The head, neck and chest are yellowish-brown, the bottom is bluish-green, the back and wings of the dark olive-green, the edge of the wing and the stain on the forehead are red or brick-orange. Some individuals have a pinkish plaque on the cheeks. Light beak, near -eyed ring black. The iris is dark brown. Gray paws.

Lives in the west, south and southeast of Africa.

Inhabit savannahs, forests, mangroves, fruit gardens, up to a height of 4000 m above sea level. Live mainly in pairs or small groups. The flight maintain contact with a loud scream. They feed on seeds, berries, nuts, flowers, leaves and twigs of trees, sometimes insects.

Unpretentious parrots. They live at home for a long time.