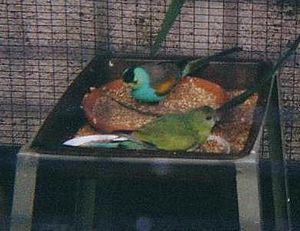 Body length 24—26 cm, tail 12 cm; Weight 55 g. The main coloring of the plumage is green with a bluish tint. The back of the neck, crown and front of the head are black. Chest, front side of the neck and part of the abdomen are blue. Brown back with gray tint. Wings in the front and spatula yellow. The tail of the tail is dark brown, with light red ash. The paws are pink-gray. Females have a less intense coloring, they prevail brown-green tones.

Lives in the north-east of Australia and on the Arnemland Peninsula.

Semi -air savannahs, edges of the forest along rivers inhabit. They feed on plant seeds.

The nesting period falls on May-July. The nests are built in termitects, digging holes up to a meter deep. The female lays from 2 to 6 eggs. After about 20 days, chicks appear, they fly out of the nest after a month.

The number is quite low and continues to contract both as a result of the development of their habitats for livestock, and (to a greater extent) as a result of poaching of birds. Currently, the total population is calculated only 250 individuals.