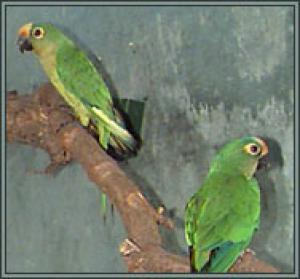 Body length 26 cm. The coloring of the plumage is green, the lower body with a yellowish tint. Crown of blue-green color, forehead in red and orange colors. The upper chest and throat have a brown tint. The iris is orange-red. The coloring of males and females is the same, in females the beak is thinner and males are slightly larger than females.

They live in Brazil, Peru, Suriname, the eastern part of Bolivia, in the north of Paraguay and North-West Argentina.

Inhabit the edges of subtropical and tropical raw forests, dry savannahs, parks and gardens. Live in pairs and small flocks from 4 to 8 birds. Sometimes an accumulation reaches 20 to 30 birds. During the flight, piercingly squeal.

The female blows 2-5 white eggs and forces them 21-26 days. Some males enter the nests during the incubation of masonry, but do not take part in the incubation. Chicks leave the nest at the age of 50 days. They resemble parents in color, but the orange strip on the crown is already lighter, the blue color on the back of the head is paler, lighter beak and gray iris is gray.

For the first time was brought to Europe in 1869. Currently, this is the most common look from amateurs from this kind, suitable for housings in captivity. The ability of these parrots to reproduce different sounds are not the last meaning: whistle, squeak, cough and human speech.